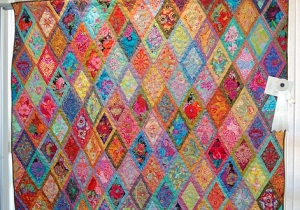 Tina’s Jeweled Diamonds was the featured quilt at the International Quilt Festival this past weekend.

This past week Tina has been at the International Quilt Festival in Houston where her quilt, Jeweled Diamonds, was featured as the show’s “signature” quilt. The quilt’s image has appeared in festival promotional materials, tote bags and T-shirts. Tina debuted Jeweled Diamonds at the Mariners quilt show in 2012. It’s also been in juried in AQS Paducah 2013 and the Canadian Quilter’s Association National Juried Show 2013. END_OF_DOCUMENT_TOKEN_TO_BE_REPLACED